Welcome to the USS Ranger!

Since the destruction of the Romulan and Reman homeworlds the Federations resources have been stretched thin, assisting the Romulan people in evacuation and relocation efforts. Along with helping them colonize worlds now outside their reach, even relocating some of the Romulan people to Federation planets such as Earth. Many Federation leaders and citizens were not okay with Romulans being on Federation planets after their long violent history, but like every Starfleet Officer knows sometimes you have to deal with things you don't always agree with.

The subsequent destruction of Utopia Planitia and Mars, by a group of synthetic beings, led to the ban of all synthetic life forms. The Federation was in chaos for a few months, but quickly pulled it back together and did what needed to be done for the safety of its people.

In 2394 The Intrepid Class, USS Ranger was given a much-needed refit, assigned a new command staff and crew, and sent to assist efforts in the Alpha and Beta Quadrants. The Intrepid Class is a vessel designed for exploration and that will be the Ranger’s primary mission, when not needed else where by Pegasus Fleet Command.

Tensions are once again on the rise with the Cardassians and Pegasus Fleet has dedicated a large number of resources to the areas surrounding Cardassian space and getting Federation citizens out of Cardassian territory. One of the most wanted criminals in Federations history is on the run through Cardassian space and no one is any closer to apprehending the man responsible for crimes against the people of the Federation. 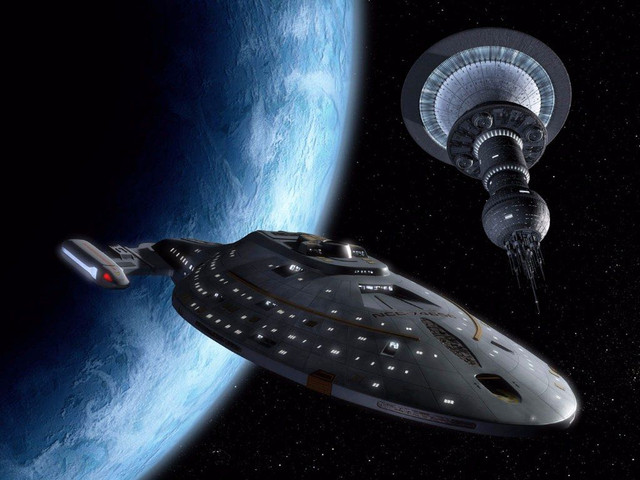 » The Great Debate (Part I)

Siren let out a string of very creative curses and threw her phaser towards the target. It would have been more satisfying if she hadn't had to transfer the weapon to her left hand in order to throw it, but her right wrist was in the midst of a rather…

» Welcome to the Ranger

The newly promoted Captain Arlidd exited her ready room an extra gold pip on her collar and a smile on her face. She looked to the center of the bridge and started up the stairs to the turbo lift "Mister Macquarrie" she paused and leaned over the railing "would you…

Mission: Creating a world on a Galaxy
Posted on Thu Feb 25th, 2021 @ 3:19am by Captain Zelea Arlidd & Lieutenant Christina Hartley

The Ranger was just hours from the starbase they would deliver the survivors of the USS Churchill to but Commander Arlidd had some new members of her crew to visit and made her way into Sickbay.

Christina smiled as she held the twins. Kin was in their quarters with Kimberly,…

The USS Ranger's first mission had been an interesting one to say the least. Commander Arlidd had been debriefed by Starfleet command and the survivors from the Churchill had been turned over to the medical teams of the starbase the intrepid class ship was in orbit of. The Commander was…

The trip back to Federation space was a long one and the crew of the USS Ranger still had around twenty eight hours before they would reach starbase one twenty six. Where they were set to deliver the survivors they had found aboard the Churchill and the Commander would be…

» My name is Steven

As I sit here in my personal quarters aboard the USS Ranger. I am drawn to an old saying I once heard. My friends grandmother used to say.

Be courteous to the people you meet. Because one day you may meet them again. Today that phrase came…

» Arrival at the U.S.S. Ranger (72 hours prior to departure)

After being given temporary quarters on the space station my stomach grumbled. I knew the cafeteria was not to far from the quarters i was given as i went to look for food. While I walked through the corridors I was not that oblivious to the eyes on me. I…